Councils need to STOP throwing away our pets!

Most pet owners are shocked to find out that many councils are simply disposing of traffic accident pets WITHOUT a simple scan to inform the owners.

Imagine the heartache of someone searching for a pet which the council have not bothered to scan. A one minute scan can halt a lifetime of searching.

Heléna Abrahams is campaigning with her petition on behalf of millions of pet owners after her cat, Gizmo, became an RTA victim and was not scanned.
UPDATE: Success!
Her petition has implications for all cat and dog owners.
She reached 107,062 which triggered a parliamentary debate and a future invitation to speak to DEFRA who are now considering options and a planned meeting.

What is 'Gizmo's Legacy' and why is it vital that councils scan pets they find?

"Gizmo's Legacy is a government petition to get some real scanning legislation for pets so that what happened to me doesn't happen to other pet owners.
It started after Gizmo was thrown away after being involved in a road traffic accident (rta) without her chip being checked. Sixteen years she was in my life but she was just classed as a piece of rubbish.".

How long had you spent searching for Gizmo before finding out she had been found and disposed of without even being scanned?

"We spent several weeks of searching and calling around until our worst fears were admitted. When we looked into the issue of what happens to pets found by the council it became very clear that there were no proper rules in place. Some councils act properly and some councils will scan dogs but not cats. Some councils have procedures but they are not followed or enforced."

I set up the Facebook group Deceased Cats UK and IRL where anyone with a missing cat could come to one place and look to see if their cat had been involved in a RTA so they could get closure quickly. It was through this group we got word of cats being thrown in to the back of refuse trucks and caged vans owned by councils. I knew the only way to stop this was to start a government petition as trying to talk to councils was pointless. We now have hundreds of volunteers who as soon as the posts go on the group race out to beat the council to these little ones. They are scanned and if chipped they are reunited and if not chipped they are treated with dignity and taken to vets and we use photos to try and find the owners.
We need the whole country behind us now to get these last signatures or cats will
just keep being thrown away.".

How quick is it to scan a microchip?

Founder of Vets Get Scanning, Debbie Matthews, also of SAMPA, the 'Stolen and Missing Pets Alliance' explains:
"The public have been led to believe that if we microchip our pets it’s our best chance of being reunited with them. Sadly as you can see from the Gizmo's Legacy petition that scanning microchips as mandatory is non existent and the loopholes continue to widen. “.

"Scanning a pet for a microchip is not difficult, nor is it expensive. Each council simply needs a reliable microchip scanner and have an authorised login to the databases in order to be able to find the pet owner's contact details. It really is that quick and simple.".

Toni Clarke's cat Clooney was stolen in June 2013. Today her best chance to reunite will probably come from Clooney's microchip:
"Whilst some local councils have a policy of scanning cats who have become RTA victims, many do not. Currently there is no consistent approach across the UK, with councils or their contractors for road cleansing not even being required to hold microchip scanners as standard, let alone scan.
Whilst the Highways Agency has been mandated to collect, scan and notify owners when a deceased pet has been picked up on a motorway or major road, no such obligation is in place to cover family cats who become victims on council controlled minor roads - and this is where the majority are killed.
Making it a requirement for all UK councils to scan would ensure that owners could be saved the heartache of endless searching and wondering what happened. No much-loved family pet should ever just be thrown away!"

Who else has this happened to?

Some may know the story of Coco who was killed in an RTA last December on Dunmore Road, Abingdon, Oxfordshire.
He was at the side of the road for 24 hours without the owners knowing. The owners heard via Facebook a deceased cat was on the path. They later heard the local council were called. After an extensive search having put up posters, calling vets, charities, registering him on Pets Reunited, the council and Biffa (contracted waste team) and having put up a sign asking for information at the point he was seen, the owners were still at a loss as to where he was.
Owner Sarah Brown explains "We spoke to Biffa four times on the day he was taken and I felt I was being more of a hindrance than receiving any support. Each time they had no news. A week after he went missing we received a reply on Facebook that someone saw a Biffa lorry collect the cat and put it in a blue bag. Without this message we would never have known. My husband went to the office immediately with this information.
We waited for the manager's reply but didn't hear for hours later, so I called the council complaints office. Finally we had an answer. They had collected him. The driver put the bag to one side at the depot and got distracted, someone else then put all of them out for incineration. Because of Biffa Waste, we did not get to bring Coco home to be cremated as we would have, but due to their incompetence they did not scan for his microchip and put him out to be incinerated on the same day when collecting wildlife involved in RTAs.".

Currently there is no scanning legislation!

“If a cat or dog loses their life in a road traffic accident, councils can simply throw the body away. Scanning deceased cats and dogs for microchips is not compulsory, which means families across the country will never be reunited with their missing pets. This is wrong. It should be compulsory for cats and dogs to be scanned by authorities. If you agree, please add your signature to the Gizmos Legacy petition, and please share widely with friends and family.” Dr. Daniel Allen.
https://petition.parliament.uk/petitions/229004

#GizmosLegacy is important to dog owners because currently there is no requirement for councils (or vets) to scan any deceased pets for microchips. The exact same thing has happened to dog owners. There have been several incidents where dog owners have spent thousands of pounds and hundreds of hours searching for a missing dog - only to find that someone from the council sees a 'missing' poster and remembers disposing of a dog matching the description, without even checking for a microchip.

The current system is a muddle with no structured procedure or policy standardised in place. Pets are family members and it is an outrage that cats and dogs are being tossed away without any concern for a distraught owner.
Pet owners pay council tax and the very least they should expect is a council having a scanner and a few moments to scan a pet.

Heléna Abrahams has celebrity backing for her petition from Emmerdale actresses Samantha Giles and Katherine Dow Blyton. She has also appeared on the television show Do the Right Thing. 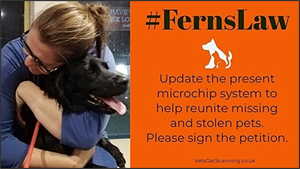 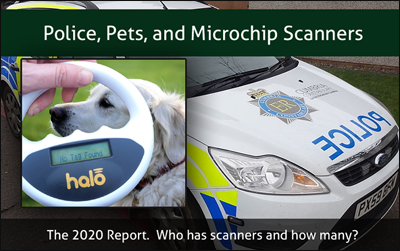 How many pet microchip scanners do the UK Police own? With almost ten million dogs in the UK required to have microchips - and the possibility of compulsory cat microchipping - we contacted all the UK constabularies to see if they have enough scanners to deal with the current laws that go with dog and horse compulsory microchipping? This report is not a criticism of the police but more a critical look at how their service could be improved with some funding and training.The foi was requested in July 2019 and the figures returned between then and the end of the year.

Before we get into the figures let's talk briefly about microchips and scanners and databases:
All pets and animals (except insects of course) can have a chip inserted. Dogs and cats will have them implanted above their shoulders below their neck. Reptiles have their chip in their rear left leg. Valuable carp fish are microchipped and so are parrots. Dogs must legally be chipped with correct ownership details.  The…
Read more 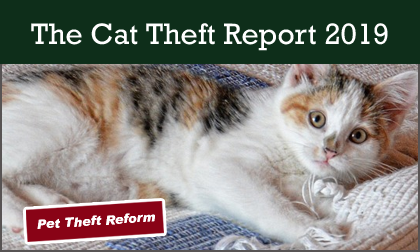 The 2019 UK Cat Theft Report:
Police crime figures updated and there's not much to purr about! The 2018 data is now in and it is showing that recorded cat theft has risen by a shocking 34% in the past year, making the overall increase 114% since 2015. The big question is: how much of this increase is due to some police forces upping their game by recording these crimes and how much is it a reflection of the cat theft picture?

Before reading this report please ensure you sign the Scanning Petition: http://chng.it/hxW952ry

Why the need for a Cat Theft Report? Very little primary data has been gathered about the extent of the theft threat for cats and our feline companions were being left out of the debate as a result. It seemed to us that if we were ever going to be able to sharpen our claws when it comes to legislation this needed urgent addressing.

The Cat Theft Report 2019 is the result of data gathered under a Freedom of Information request to all UK police forces, covering the …
Read more 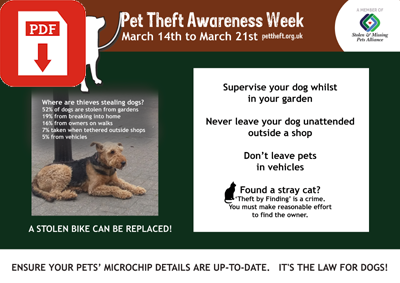 Pet Theft Awareness Week 2020 March 14th to March 21st Many pet owners do not use social-media platforms. You can help them by sharing the 'print  and display' poster link http://www.pettheft.org.uk/img/PTAW-Printout.pdf
and asking pet related organisations, shops, libraries, and any public places who can display the A4 poster in their windows and on their walls.
Email the link to your vet, groomer, kennel, cattery, and make others aware.
Pet Theft Awareness: www.pettheft.org.uk
2020 PTAW Day Planner: 1. Mar.14th:  #DTAD - Dog Theft Awareness Day. Sign Petition and Write to MPs (Sat)
2. Mar.15th:  Prevention (Sun)
3. Mar.17th:  Where are Dogs Stolen From? (Tue)
4. Mar.19th:  Horse (Thur)
5. Mar.20th:  Don't Buy Stolen Pets  (Fri)
6. Mar.21st:  #MissingCatsDay (Sat)

How can you help? Please email your MP and tell them why you think it's important they should attend the Pet Theft Debate.
Find my MP and details from SAMPA
Please write to your MP: http://www.stolenandmiss…
Read more